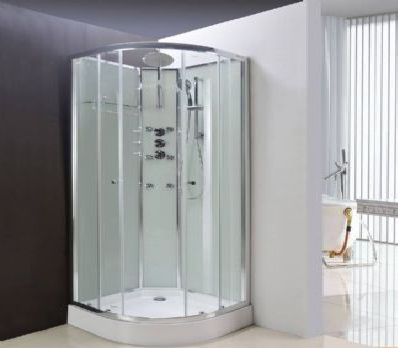 You have selected everything you need for your bathroom, except for the shower. When you checked online for your options, you were shocked by the number of brands and options. You narrowed them down to a single image but found that it came in different names. Let’s distinguish the difference between the two:

What is a shower cabin?

A shower cabin is a standalone unit that has everything you need for a shower: a shower head, waterproof floor, drainage, and an enclosure. All models have the regular shower, but there are some that have extra features like water jets and steam which you can control based on your preference.

The benefit of a shower cabin is that it comes in various sizes. If your bathroom is big or small, you can work with space. The doors on the shower cabin help you delegate a spot for showering without trying to figure out how to fit it in the room. You can focus on scaling the size of your toilet and sink, instead of trying to provide a full-size shower in a place that cannot handle it.

It can be a luxury purchase if you want it to be. The general design of the shower cabin, from the metal fittings to the glass, can be sleek and stylish. The additional features don’t have to stop at jets and steam. The more high-tech models have a radio, LCD screen, and temperature control.

When compared to a traditional setup, shower cabins are inexpensive. You do not need to have a fully tiled bathroom to take a shower. It is difficult to compare the traditional set up with the shower cabin. The cabin has so many extra features which would be more expensive to replicate in the conventional setup.

What is a shower enclosure?

Instead of being the one answer to your bathing problems, the benefit of a shower enclosure is that you have more creativity when designing your bathroom. They come in quadrants, pentagons, and semi-circle shapes.

Another added feature is that for those who prefer a simple setup, you can still experience a steam shower. Since all the heat from your water is closed off, you can enjoy the benefits without any added costs.

You do not need to exert too much effort with cleaning either because the tile extends from the entryway to the shower. There is no switching of cleaning solution or brush since it is the same anyway. Cleaning the glass of the standard cube-like enclosure is quick and easy with a squeegee.

What should you choose?

Select based on your lifestyle. Long showers to relax? Shower cabin. A quick rinse before you need to run? Shower enclosure. Select based on who will use it. Only you? Cabin. Your children and extended family? Enclosure. Hopefully, this information gives you enough to go on to make your purchase.

Tips to Follow to Shield Away Your Office from Infectious Beings

5 Qualities of the Best HVAC Repairer

Concerned About The Condition Of Your Old Bathtub? Consider Bathtub Refinishing!

Custom Builds Mean Not Having to Compromise

Preparing your home for AC installation: 5 Steps to Follow

Why You Should Add a Stairlift To Your Home.

The Importance Of Using a Professional Provider When It Comes To Asbestos Removal.